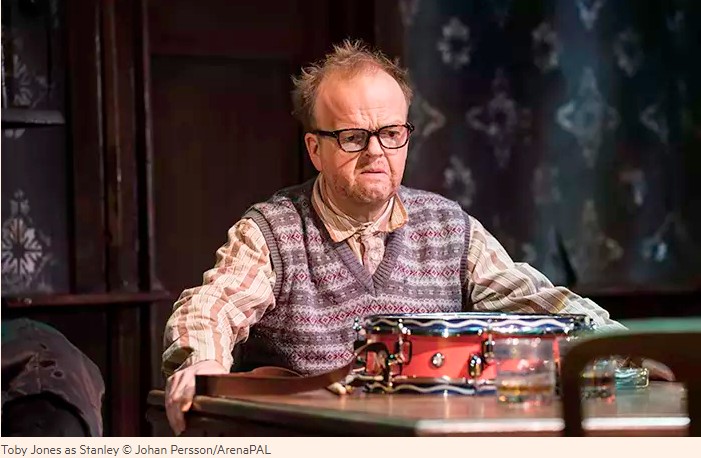 “The Birthday Party” directed by renowned director Ian Rickson, will be staged at London’s Harold Pinter Theatre until April 14th , featuring an exceptional cast including Toby Jones, Zoë Wanamaker, Stephen Mangan and Pearl Mackie. The performance is already a success with critics and the public.

It is hard to believe that at the play’s London debut at the Lyric Hammersmith, exactly 60 years ago, Pinter’s work was heavily criticized. “Mad, wearying and inconsequential gabble” sighed the “Financial Times”.

And  “The Guardian”:  “What it all means only Mr Pinter knows”

Today all involved in the infamous flop of “The Birthday Party” premiere  have pased on to a better life.

The only survivor is Sir Michael Codron, the producer who at the time had the courage to represent the work wirtten by Pinter at only 27 years of age.

Codron, who will be turning 88 in June, is the owner of the celebrated Aldwych Theatre, and continues to manage the thatre’s programme from his office at the top of the building. “I am only a figurehead” he declared with the acute intelligence, irony and and modesty which characterize him.

In truth Sir Michael is a living legend of theatre and the West End’s oldest producer.

He has put on over 200 shows and, as well as Harold Pinter, has discovered talents the likes of Tom Stoppard, Simon Gray, Christopher Hampton, Joe Orton, Michael Frayn, Alan Bennett and David Hare.

Codron recently gave an interview to “The Spectator” during which he talked about that traumatic evening when critics tore to pieces “The Party Time”, which is today a universally acclaimed play.

Sir Michael was 27 when he convinced his father he was not cut out for the textile import business.

At the time he had already attained a certain success with a play and a couple of performances at the West End. He decided to put on “The Birthday Party” after reading Harold Hobson’s very good review of another Harold Pinter play, “La Stanza”.

But the celebrated critic did not turn up at the infamous premiere, and to no avail was his late defense of the work after having seen it in Pinter’s company and six other spectators at a matinée.

Harold Hobson on “The Sunday Times” quoted : “I will put my reputation as theatrical critic at stake and say that Mr Pinter posesses the most original, and gripping talent of London’s theatre scene”.

Unfortunately it was too late: the play had been called off.

Not even Sir Michael Codron know what the reasons for such a debacle are. Probably neither the public nor critics were ready for Pinter’s innovative style, prefering musicals and light comedies.

How did Pinter take it? Codron declared:

“More nobly than I could have expected.

I think he kept the receipt of the week and had it framed and put in his loo!”

Two years later, on March 22nd , thanks to TV producer Peter Willes, – “The Birthday Party” was broadcast on television and watched by  11 million viewers.

2 thoughts on “Michael Codron, the man who discovered Harold Pinter”