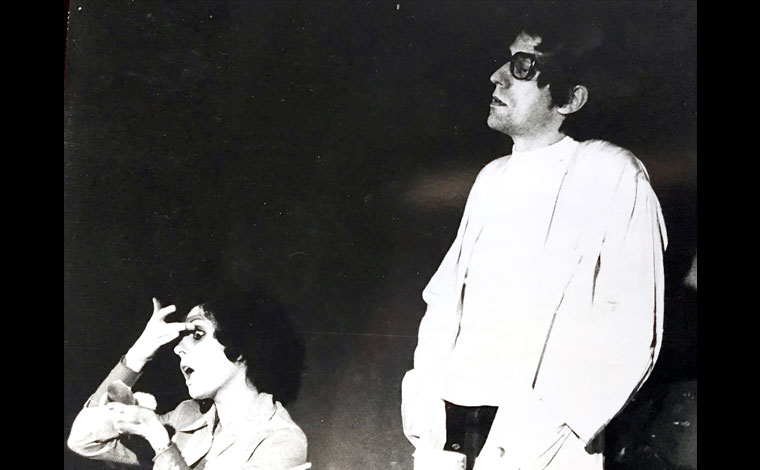 I ring the doorbell after crossing a beautiful courtyard unveiling a side of Milan you rarely get to see.
A tall man opens the door, his smile and deep eyes revealing beauty, in the Greek sense of the term,  untamed and sustained by the charm of years lived with fervor and intensity. 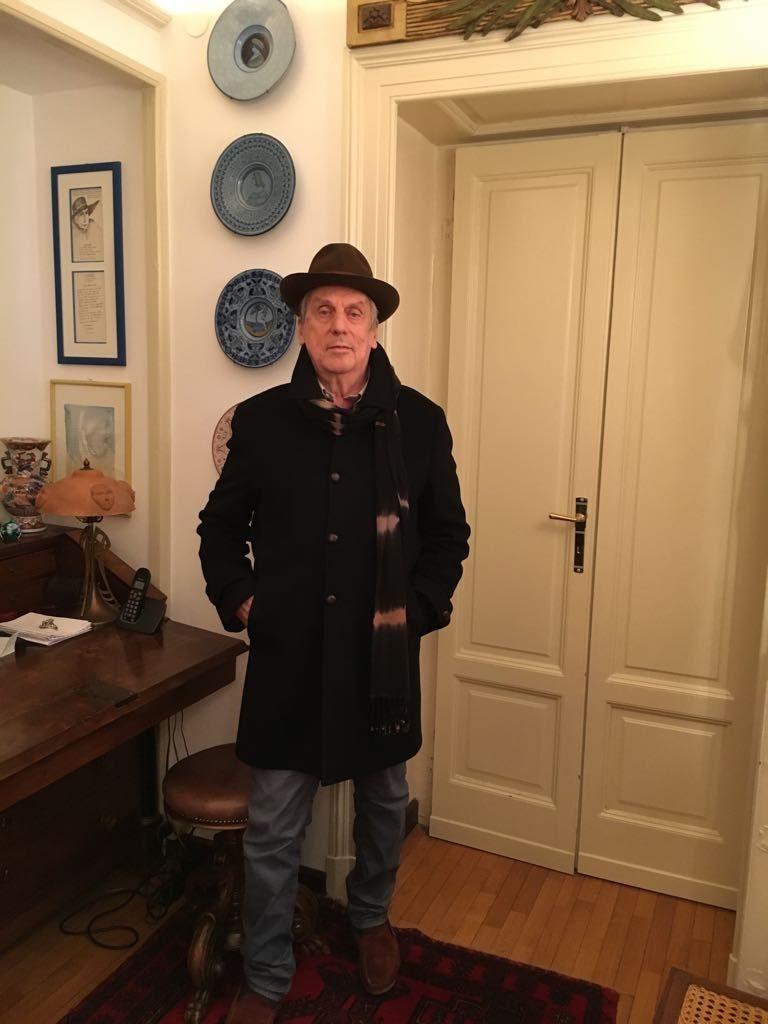 In just a few minutes I feel as if I already knew Alessandro Quasimodo. Yes, him. The son of the much loved poet and Nobel laureate Salvatore Quasimodo and of Maria Cumani, dancer and choreographer, as well as actress of prose who featured in many films by directors such as the Taviani brothers, Pasolini, Fellini, Liliana Cavani, Rossellini, Dino Risi.

I had written to Alessandro asking him to describe his “encounter” with Pinter for Pinter Mon Amour. In 1973 Alessandro was the first Italian actor to play Stanley, the complex character  in “The Birthday Party”, written by the English playwright in 1958.

Together we leaf through the countless articles describing the event and his performance. Our conversation opens up. Intimate memories of life in the paternal house where culture was everywhere, of Christmas poems written at the age of  11, his diploma from Milan’s Piccolo Teatro, and the time when the great  Lee Strasberg chose him for a master workshop at the Festival dei Due Mondi in Spoleto… 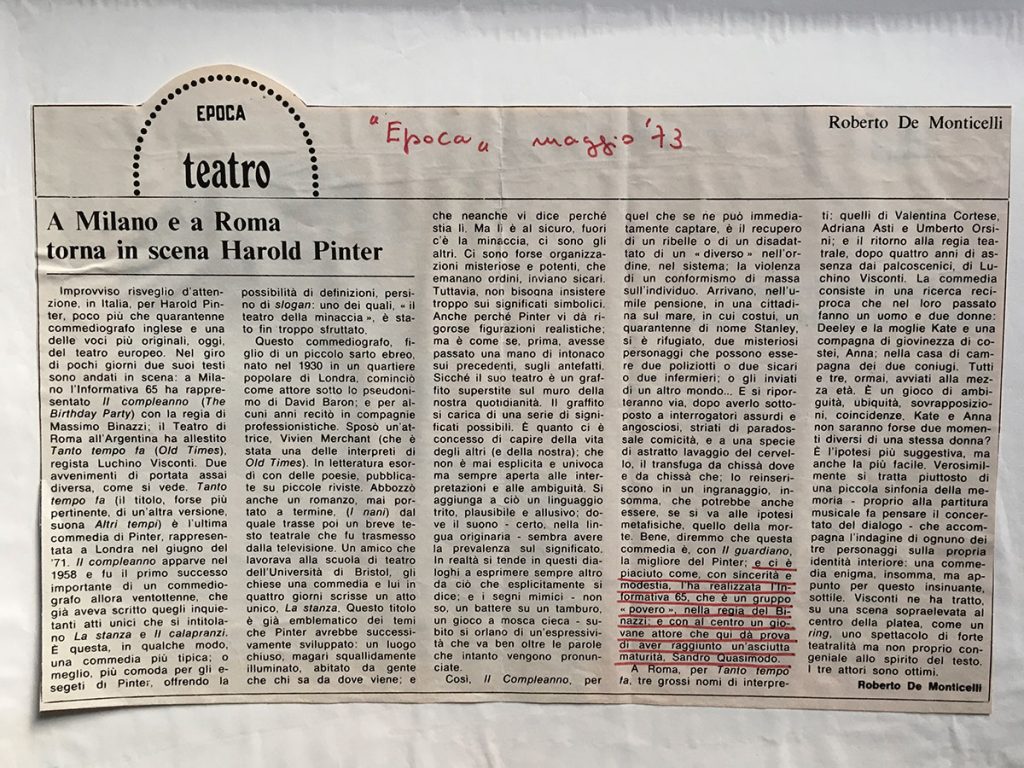 Recollections that enchant me, I wish they would never end… four hours full of emotion and only one question, the one which has always interested and fascinated me the most: how do you breathe life into  a character , starting off merely from  a portrait on paper and finally presenting him on stage?

Pinter Mon Amour: Alessandro, what did playing the part of Stanley mean to you?

Alessandro Quasimodo: it’s something  I put a lot of time into. From the first read through I understood that I could interpret Stanley by delving deeply into his world, into his character. I was immediately enchanted by the style of writing, I was fascinated by Stanley’s fragmented manner of speaking, the wonderful relationship made of annoyance and love he has with Meg, the boarding house owner who takes him under her wing and treats him like a son while Stanley plays aloof because he feels affected. He is an antisocial  character who refuses to play a role in society. What I particularly liked was that he seems to live in a prolonged state of adolescence, maybe  because he never  lived it as fully as he would have liked to. And so Stanley takes refuge there, in that boarding house by the sea.  Nobody asks him where he comes from. He could even be an escapee from a mental hospice from the fragments of the past that sometimes surface in his tales. For example when he remembers the concerts he would get ready to play and the halls he always found closed…obstacles preventing his from realizing his aspirations.

Life in the boarding house is repetitive. Daily rituals start with breakfast and each day goes by shrouded in a claustrophobia . Even Meg’s husband, who is pure at heart and seems to live in a world of his own finds himself involved in this game with no way out.

The monotony is interrupted by the arrival of two mysterious men who convince Meg to organize a birthday party for Stanley even though he says it’s not his birthday. Another guest arrives, a young woman. Meanwhile the guests put Stanley through a gruelling nonsensical interrogation. He can’t stand it, he screams, then has a breakdown and is no longer able to talk. Where do they want to take me? Who are these men? Two asylum janitors who want to take me away?  Then they break his glasses so he can’t see what is happening: a metaphor… once blinded he can return to society.

Pinter’s judgement of English society is unforgiving… men with bowler hats and carrying an umbrella, ready to become one of society’s cogs. The play is unnerving. Some moments make you smile but you can’t turn it into a humorous play. 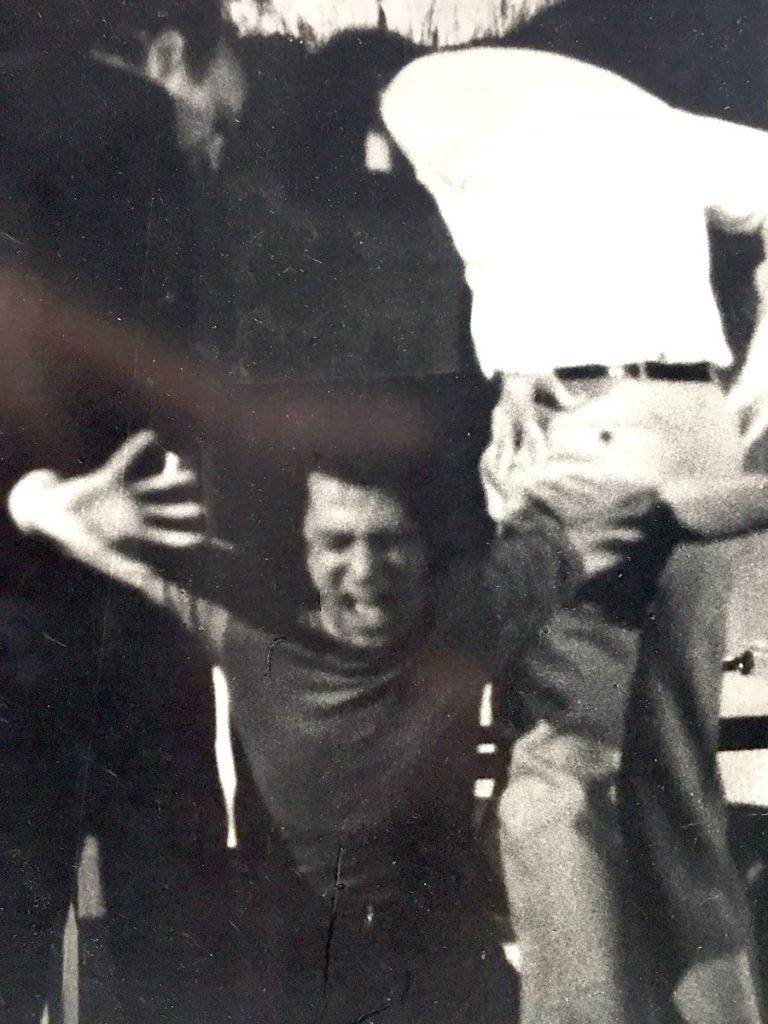 Pinter Mon Amour: Alessandro, earlier you told me that every evening you longed to play that role on the stage. When you had this feeling, this desire , what was your reaction?

Alessandro Quasimodo: it was liberating. I felt wonderful afterwards. It was as if a weight had built up inside Stanley which he needed to get rid of, and the two men with their absurd interrogation help him get rid  of it. It’s a theatre of the absurd interrogation,  where certain chords are touched leading to the final resignation of a man who has lived on the margins of society and therefore needs to be constricted into the ranks. In the end he appears like an automaton.

Pinter Mon Amour: is this theatre of the absurd or is it a metaphor of  reality?

Alessandro Quasimodo: it is the metaphor of something very real, that can happen in certain situations, when fathers or parents force their children to become lawyers or work in a bank when they’d rather write poems, or act, or become dancers… Do you understand what I mean?  It’s a form of violence.

Alessandro Quasimodo: he is extremely relevant. I am too old to play Stanley now but  he is a wonderful and modern character .

Pinter Mon Amour: the violence you mentioned, which you identified with the family, could we say it is now exercised by society which has been contaminated by it?

Alessandro Quasimodo: the mechanisms of society strongly condition us and lead us  to choose a path we might not have chosen, because it is not the right one for us, we do not identify in it.  Nowadays  it is increasingly difficult to choose a career in the arts … what future can it guarantee you?

Pinter Mon Amour: if you could choose a character to play now, who would it be?

Alessandro Quasimodo will take part in Pinter Week. On October 10th  – the anniversary of Pinter’s date of birth – at the end of the national premiere of  Landscape, he will perform a series of extracts from The Birthday Party.

For info: A World with a View

Tags :
A World With A ViewAlessandro QuasimodofeaturedLandscapeMilanoPinter WeekThe Birthday Party