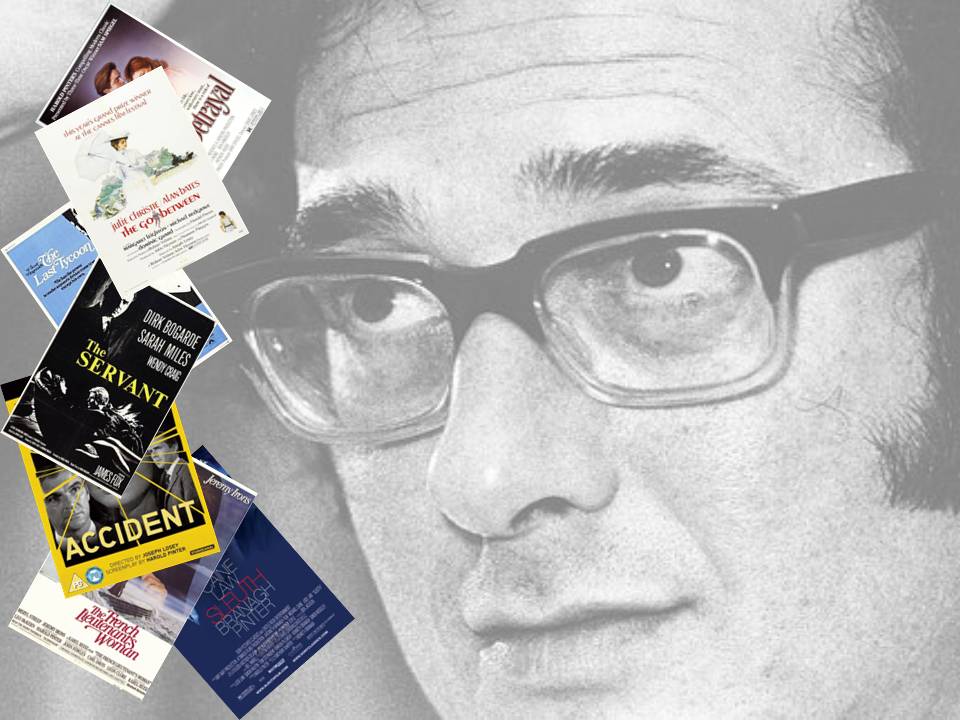 It’s as if I could see Harold when he was a child. I imagine him entering a movie theatre, on one of those misty English afternoons, sit down and watch a black and white gangster movie. He found them extraordinary, those movies.
It was during the tough years of ’40 and, perhaps, he did not know yet that he would have written 25 screenplays and starred for the big screen.

I can almost see him, adolescent Harold. At school, at Hackney Downs, while he holds a passionate speech for his comrades on French realism and post-realism, struck by Les Enfants du Paradis, the legendary movie directed by Marcel Carné and written by Jacques Prévert.

The years pass and in 1962 an already famous Dirk Bogarde hears that a young, unknown comedian, has written the screenplay of “The Servant” based on a novel by Robin Maugham. The film had already been commissioned by Michael Anderson.

Bogarde’s phone call to the great director Joseph Losey, changes the course of history, at least that of Harold.

Losey acquires the rights from Anderson and starts working with Pinter to the future, indisputable, masterpiece.

Harold and Joseph are similar for their sensitive themes and continue on their journey together: in 1966 the movie “The Accident” – where Pinter appears briefly as a cynical television producer – and in 1971 “The go-Between”, a masterpiece of the US director and Palme d’Or at the Cannes Film Festival.

Meanwhile, tireless and passionate, he also works for television and cinema.

Harold was nominated twice for the Oscar. The first time in 1981 with “The French Lieutenant’s Woman” – with Jeremy Irons and a spectacular Meryl Streep – that wins a David di Donatello Award for best screenplay. The second, in 1983, for the screenplay “Betrayal” – directed by David Jones and played by Jeremy Irons and Ben Kingsley.

A year before his death, his last movie effort: “Sleuth” (2007) – remake based on the homonymous play of Anthony Shaffer’s text – directed by Kenneth Branagh, starring Michael Caine.

In a Time Out interview he said, “Hollywood, mainly, is a kind of shithouse. But out of this shithouse, they’ve produced the most surprising films.”

And we cannot say that Harold did not mean it: “Altogether, I have written twenty-four screenplays. Two were never shot. Three were rewritten by others. Two have not yet been filmed. Eighteen were filmed as written. I think that’s unusual. I certainly understand adapting novels for the screen to be a serious and fascinating craft. The other 18 were shot exactly as I had written them. And I do not talk much about the dialogues, about the structure. I have always been very helpful, so to say, to kindly discuss about the structure. This is such a delicate matter, the structure of the film, isn’t it? What if you shift a scene to two minutes later? It’s an endless, eternal search, which is very exciting. It truly is.”