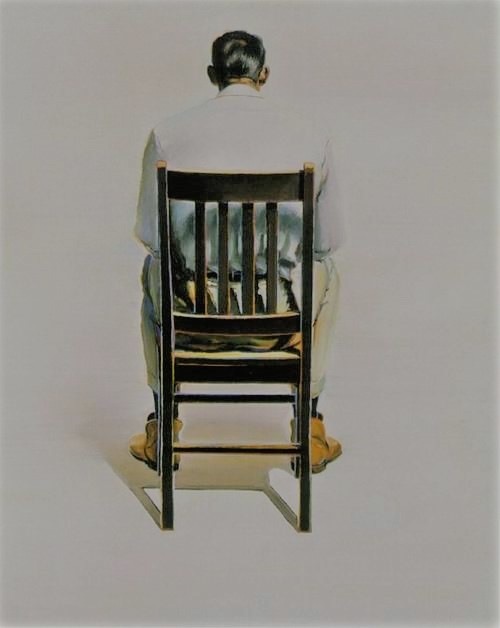 From October 25th the Harold Pinter Theatre, as part of the “Pinter at the Pinter” review, will be putting on “Monologue”, a short work originally written for television by Harold Pinter.

Broadcast for the first time by the BBC in1973 directed by Christopher Morhan, the work was masterfully interpreted by Henry Woolf, one of the British playwright’s dearest friends who in 1957 at Bristol University directed the first staging of “The Room”, the first play in Pinter’s dazzling career.

The only character in the play is identified simply as Man.

A middle-aged man, sitting on a chair, who talks facing another empty chair.

Man reminisces over the moments spent with this invisible other: a tennis match, a walk in the park, a couple of hits at golf before breakfast. A deep intimacy between two men, suddenly shattered, as often happens in Pinter’s works, by a disruptive female presence: a beautiful black girl who insinuates herself between the two friends: “You loved her soul and I her body”.

But who is this invisible character?

An imaginary friend? A friend from times gone by? Man’s younger alter ego? A relative? He might well be as the play ends with the words: I would have been their uncle… I am your son’s uncle.”

But maybe that isn’t the important thing after all. Because as Pinter once said. “My plays are about what the titles are about”.

Monologue” might not be about friendship, the past or love triangles. It could just simply be a monologue in which the most important thing is not what is said but that what is said remains without answers.

Once again, an example of Pinter’s genius.