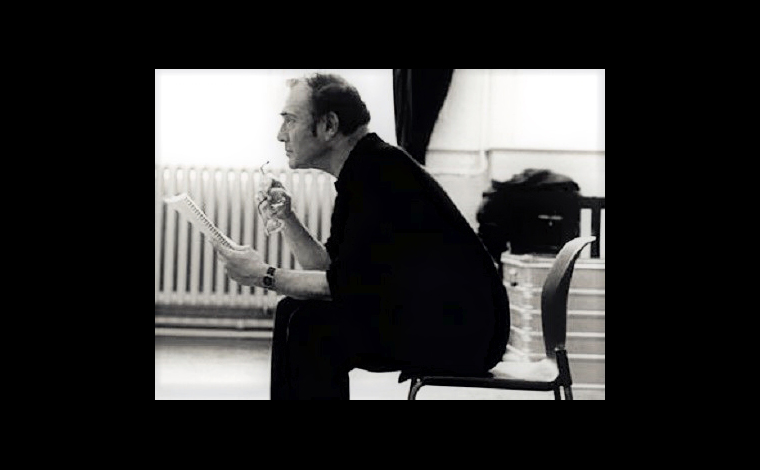 Harold never betrayed you. That is why, as an actress, I am grateful and have a deep respect for him.
When you first encounter his text and try to understand the scenery and the background – rarely shown by  Pinter – you feel lost for a long time. Then, if you rely on his writing, if you learn to know his thought process and his poetry, you can always find life, inner motives, past, thoughts, desires, and frustrations of the characters.

In 1971, in a speech held in Hamburg, Pinter said: “Sometimes the director asks me during the rehearsals: ‘Why did you say that’. And I say, ‘wait a minute, let me look at the text.’ I look at the text and I suggest: ‘does not say this because he said that, two pages before?’ Or ‘because she feels something different, so she says that’. Or: ‘I do not have the pale idea. But somehow we have to understand it. ‘ Sometimes I learn a lot from the actors’ portrayal … “

I think these little Pinter words are fundamental to understanding how to deal with Pinter’s text. And so it was for us, for me, when we staged “Old Times”: read and tested the text, as long as you have the urgent need of those words, until you let it run in pauses, silences, The inner life, the conflicts, the fears, the repressions of your character and the words come out of the sun, those, unique, with the same pauses, the same points.

Because punctuation in Pinter’s dialogues is a musical score that cannot be missed, even with translation.

All dialogues, even those that appear less likely to be said, acquire absolute necessity for the character and you cannot change one more word. As he himself said about drinking coffee at a time rather than the other: if it happens, the Pièce is changing. Pinter is faithful to his style, coherent, and you can fully trust him, you have  to get out of the common categories and rationalities and get into what people really are.

“Critics talk about the problem of non-communication between my characters, as if they did not understand each other. That’s not right. I’m interested in people who have chosen not to communicate, not to understand each other … “*: non-rational connections, where they can decide not to communicate and for this they are already communicating a lot. In this is their survival, the acceptance of not being able or unwilling to understand. We are fragile outside the worlds we have built and we struggle to save those worlds and to save oursevels.