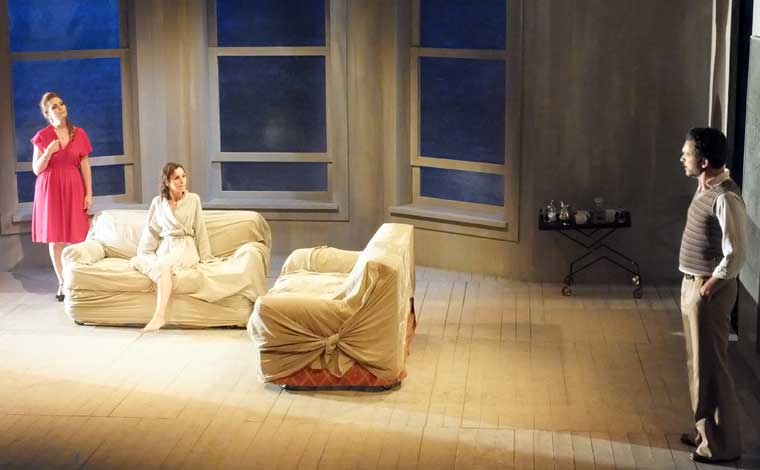 On the stage of Conciatori’s Theatre in Rome we will rediscover our past with our fears, our ghosts, the inability to express those words that we wanted and the impulsive need to successfully convey them in the piece – that – wrote shortly before working on the screenplay of Recherche by Proust for a film by Joseph Losey which was never made. A memory play, a comedy about memory that brings even myself back in time, to the first time I read and performed this wonderful work. Inevitable, because the protagonist of this piece is the past, inconsistent, contradictory and, thus, impossible to know.

But let’s go back to Kate… We are in England in 1970, on an isolated farm by the sea. She is there, with her husband Deeley, waiting for her old friend Anna with whom she had experienced the intense and effervescent London in the Fifties. And those “old times”, cheerful, free and happy emerge once again: when they used to have fun at fashionable places, Anna and Kate when they attended art galleries and exhibitions. Perhaps the three of them met at the same place or, in any case, the vague outlines of the memories seem to have brought them back to the same places. Deeley is curious, he first experiences their charm but then becomes overwhelmed by a pronounced fear: Anna makes a distant intimacy with her best friend, his wife, resurface, and he was never a part of that. So the “betrayed” husband looks for Anna’s complicity who, in turn, shuffles the cards to catch Kate’s attention and to keep her clinging to her image of the past. Hazy, omitting and tight-lipped stories follow.

Who is telling the truth? Who is lying and to whom? Is it all a dream? Are these characters aspects of a single person?