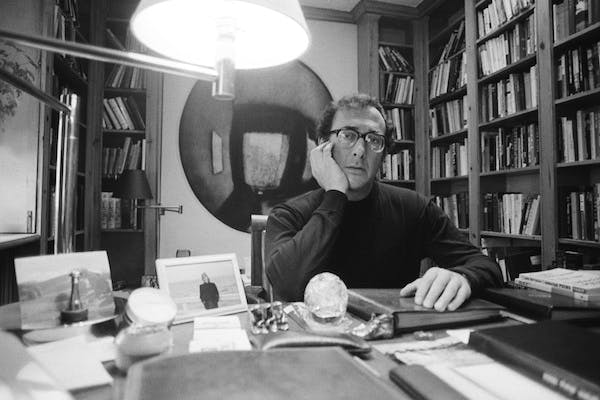 His first poem was published in 1947 in Hackney Downs school magazine.

Three years later the magazine Poetry London, founded in 1939 by Dylan Thomas amongst others, published two poems, “New Year in the Midlands” and “Chandeliers and Shadows”  by and unknown  writer , a certain Harold Pinta. No, Pinta is not a typing error but the pseudonym that Harold went by during his literary debut.

While Pinter’s plays are well known, very few have heard of the Nobel Laureate’s poems, despite poetry being his first love. A love that lasted his entire life, just as it did for his close friend Samuel Backett.

In 1951 Pinter joined a theatre company and toured Ireland performing Shakespeare and playing Macbeth under the stage name David Barron. It marked his theatrical debut. Fascinated by Becket’s homeland he continued to write poetry. In “ The Islands of Ahran seen from the Mohel Cliffs”  he praises the  beauty of the coast and the myths of the region in five verses, while in “Poem”  her imagines a morning walk with his wife through the idyllic Irish countryside.

Pinter continued to write poems throughout the years. The lyricism of the “Irish period” often inspired by Yeats gave way to verses that crystallized significant moments of his life, such as “Paris”  (1975) which recounts the beginning of his relationship with Antonia Fraser, or “Ghost” (1983) written in memory of his first wife Vivien Merchant.

At the start of the nineties Pinter increasingly dedicated his time to denouncing war and injustice.

His civic commitment is clearly reflected in his poetry as well. In 1991 he wrote “American Football (A Reflection On the Gulf War)”, which condemns the politics of Bush and Blair and which the Independent, The Observer and The Guardian all refused to publish. He continued his pacifist engagement through rhyming verse with the collection “War” published in 2003 which won the Wilfred Owen Award in 2004.

The Iraq conflict is not the only war Harold Pinter wrote about in his poems. Besides civic and political battles he was to confront a more personal struggle in verse,  whose contents are both private and universal: his relationship with the serious illness he was fighting. In 2002 he wrote “Cancer Cells” which was published by The Guardian. Once again Pinter plays with words in a poem written in a simple style which effectively conveys the drama of  what he was living through.

In 1995, in a BBC  interview, Pinter publicly announced that he was to give up being a playwright and would dedicate the rest of his life to poetry.

His love poems remain his most captivating and fascinating works, intense in style and language.  The poems dedicated to Lady Antonia Fraser. Eternal presence.

I shall miss you so much when I’m dead,
The loveliest of smiles,
The softness of your body in our bed.
My everlasting bride,
Remember that when I am dead,
You are forever alive in my heart and my head.

On October 10th, the anniversary of Harold’ Pinter’s birth, a selection of poems by the Nobel laureate  will be read after the performance of Landscape on the occasion of Pinter Week.

Pinter Week | Milan, Teatro Out Off | from October 10th  to 15th
For info: A World with a View