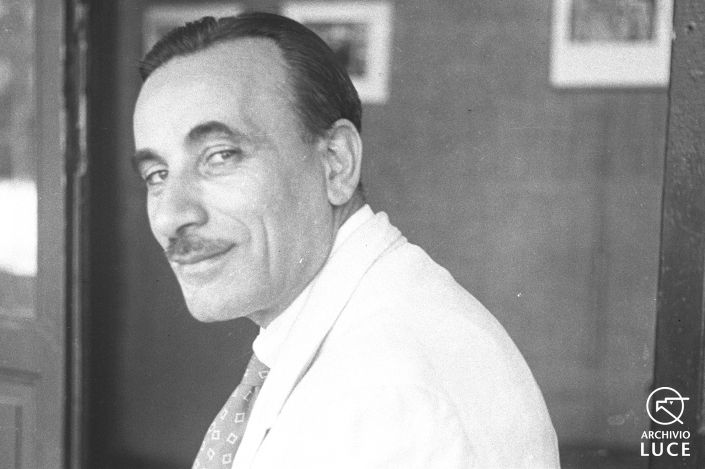 A comedian and a genius: Peppino De Filippo.

An amazing artist who, in the words of Fellini, “any theatre in the world would envy us he is so seductive and unique”.

He was an actor and a dramatist among the most loved of the 20th century.

Born and raised on the stage, De Filippo owes his popularity to his fortunate partnership with Totò – with whom he made 16 films—and to the extraordinary “Pappagone”, the character he invented and which debuted on TV in 1966.

From Pappagone to Harold Pinter might seem like a huge leap, but in actual fact it is not so, especially when the great Peppino is concerned.

And so De Filippo challenged himself and played the part of the old tramp in the TV adaptation of “The Caretaker” – written by Pinter in 1959 –  directed by Edmo Fenoglio and broadcast by the Rai in January 1977. Starring beside him were Ugo Pagliai and Lino Capolicchio.

One of Pinter’s most acclaimed works, “The Caretaker” is set in a small hovel full of useless objects, with draughts and water seeping in. The play examines the relationship between the three characters, two brothers, one of whom is mentally unstable and haunted by the memories of the time he spent in an institution where he underwent electroshock therapy, and a tramp who attempts to make the hovel in west London his home.

Following Pinter’s approval and with the aim of bringing the play closer to the Italian audience Fenoglio decided to set the play in a room in the outskirts of Milan, an ambient which is not so different from the English setting.

The characters also became very Italian: the name of the old tramp played by De Filippo was changed from Davis to Pasquale Scognamiglio and of course he spoke Neapolitan!