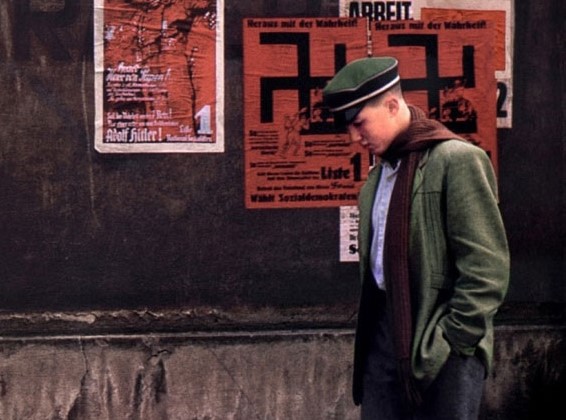 Harold Pinter never wrote an original film. But as he himself said: ”I’ve enjoyed adapting other people’s books very much…”

And of the 24 screenplays he wrote there is one, which few know about, which brought to the screen a film only too often underestimated but much loved by Harold.

The film in question is “Reunion”, directed by American Jerry Schatzberg, starring Jason Robards and Christien Anholt, first screened in France in 1989.

Based on the short novel by the English author of German origins Fred Uhlman, the film is the diary of the life of Henry Strauss, a seventy-year old Jew naturalized American, who decides to return to Germany to find out what happened after 1933 to his friend and school companion Konradin von Lohenburg. In that very year Henry, (whose real name was Hans), was sent to America by his parents to flee Nazi persecution.

Through flashbacks, so dear to Pinter, Henry thinks back to that deep friendship ruined with Hitler’s rise to power when Konradin, fascinated by the Nazi ideology, is torn between wanting to keep his friendship and the desire to not to go against his parents’ will who are forbidding him to see Henry because he is Jewish.

Director Jerry Schatzberg, who today is ninety-one, has often mentioned how exciting it was to work with the great British dramatist.

In 2006 on the occasion of the Alba Infinity Festival, Schatzberg described working with Pinter “I wasn’t convinced by some of the dialogues of the Reunion screenplay and wanted to change them, however I could not bring myself to modify his work. I would call him every time I changed a line until, exhausted by my calls, he told me he trusted me completely. The only point we did not agree on at all was the ending to the film. After infinite discussions I suggested we should write and film two different endings and decide in the editing phase which worked best. I knew immediately the film would end as I wanted it to. At the premiere in Paris he admitted I was right.”