He is known as TV’s longest-surviving Hercule Poirot, the famous Belgian detective born of the fervid imagination of Agatha Christie.  David Suchet is actually a very intelligent, versatile and refined actor, in the movies, on television and also in the theater.

Born in London in 1942 Suchet has been passionate about theatre since an early age. That’s why he joined the National Youth Theatre of the Royal Court and became part of the London Academy of Music and Dramatic Art (LAMDA), where he studied, and is today one of the Board members. His theatrical career began in 1973 with his performance as Tybalt in “Romeo and Juliet”, with the Royal Shakespeare Company.

Oleanna was a play by David Mamet about a professor accused by a student of attempted rape. It was precisely the play Harold Pinter directed for his first British production at the Royal Court in London, starring Lia Williams and, lo and behold, David Suchet. At first Pinter hadn’t wanted Suchet in the part. 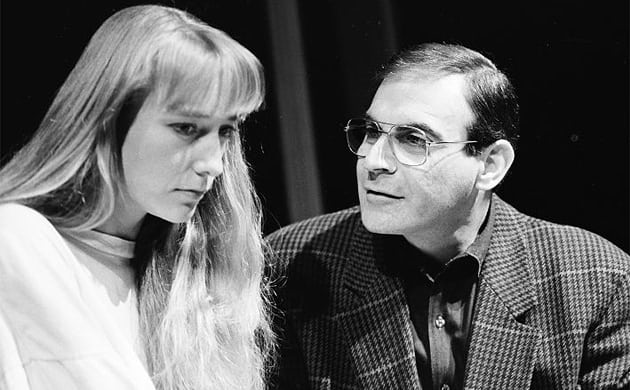 In a 2015 interview with the Observer, Suchet recalls that he didn’t want to know about being refused the role. He really wanted it and went to Pinter’s house to ask him about the reasons for his choice and, most of all, to try and convince him that he really deserved the professor’s role.

There was no need: on entering Pinter’s house, the dramatist said: “I know you might be offended but I have to tell you that you look just like the main character!”.

Suchet remembers: “He was practically calling me a pervert, but the role was mine!”.

‘Pinter at the Pinter’ is the special event to be held at the Harold Pinter Theatre in London from 6th September 2018 to 23rd  February 2019, for the 10th anniversary of the British playwright’s death. On this occasion, Suchet too will go on stage to celebrate Harold. Directed by Jamie Lloyd, he will be one of the main characters in The Lover and The Collection.