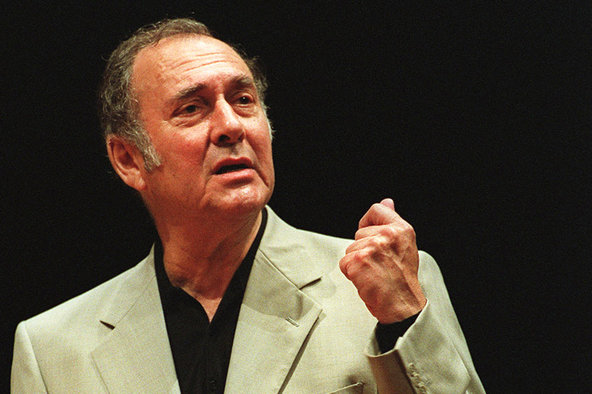 “He moved us with his cutting words, he made us smile and he made us laugh, his political analyses punched us straight in the gut taking no short cuts.”

This is what  journalist Sara Strippoli wrote about Harold Pinter in the “la Repubblica” newspaper on March 13th 2006.

Pinter had just been awarded the Nobel prize and was in Turin to receive another important award, the “Europe Theatre Prize”, established by the European Commission in 1986 and awarded to personalities or theatrical companies that “have contributed to the realization of cultural events that promote understanding and the exchange of knowledge between peoples.”

It was not the great playwright’s first time in Turin.

In 1997, following a successful  premier in Palermo,  Harold Pinter attended the performance of “Ashes to Ashes”, directed by him and interpreted by Adriana Asti.

And then again in 2002, when the University of Turin awarded him an honorary degree and he delivered a lectio magistralis which was a violent j’accuse towards US policy.

“I have lovely memories of Turin”. These were the words he uttered as he stepped onto the stage of the prestigious Teatro Carignano to receive the award. An international audience of over two hundred critics and journalists payed homage to him with a long applause.

In an interview with his biographer, the Guardian critic Michael Billington, he once again stressed his renewed love of poetry and revealed he no longer intended to write for the theatre:

“I have written 29 plays. Isn’t that enough? It certainly is for me.”

2 thoughts on “Harold Pinter in Turin”