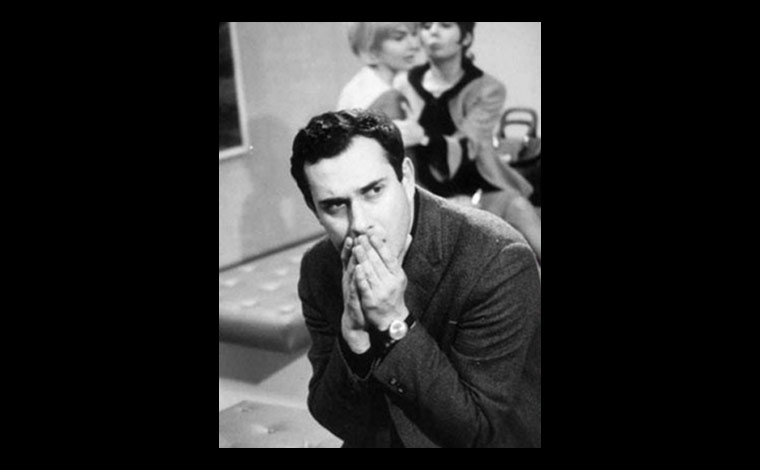 How did Pinter‘s works come about? How was Old Times born? Where do the main characters Deeley, Kate and Anna, spring from?
This time I’ll leave the answer to Harold who, during his Nobel prize acceptance speech, in 2005, explained how from an adjective and three letters…
“I have often been asked how my plays come about. I cannot say. Nor can I ever sum up my plays, except to say that this is what happened. That is what they said. That is what they did.

Most of the plays are engendered by a line, a word or an image. The given word is often shortly followed by the image. I shall give two examples of two lines which came right out of the blue into my head, followed by an image, followed by me.

In each case I had no further information.

In the first case someone was obviously looking for a pair of scissors and was demanding their whereabouts of someone else he suspected had probably stolen them. But I somehow knew that the person addressed didn’t give a damn about the scissors or about the questioner either, for that matter.

Dark I took to be a description of someone’s hair, the hair of a woman, and was the answer to a question. In each case I found myself compelled to pursue the matter. This happened visually, a very slow fade, through shadow into light.

I always start a play by calling the characters A, B and C.

In the play that became The Homecoming I saw a man enter a stark room and ask his question of a younger man sitting on an ugly sofa reading a racing paper. I somehow suspected that A was a father and that B was his son, but I had no proof. This was however confirmed a short time later when B (later to become Lenny) says to A (later to become Max), ‘Dad, do you mind if I change the subject? I want to ask you something. The dinner we had before, what was the name of it? What do you call it? Why don’t you buy a dog? You’re a dog cook. Honest. You think you’re cooking for a lot of dogs.’ So since B calls A ‘Dad’ it seemed to me reasonable to assume that they were father and son. A was also clearly the cook and his cooking did not seem to be held in high regard. Did this mean that there was no mother? I didn’t know. But, as I told myself at the time, our beginnings never know our ends.

Dark. A large window. Evening sky. A man, A (later to become Deeley), and a woman, B (later to become Kate), sitting with drinks. ‘Fat or thin?’ the man asks. Who are they talking about? But I then see, standing at the window, a woman, C (later to become Anna), in another condition of light, her back to them, her hair dark.

It’s a strange moment, the moment of creating characters who up to that moment have had no existence. What follows is fitful, uncertain, even hallucinatory, although sometimes it can be an unstoppable avalanche. The author’s position is an odd one. In a sense he is not welcomed by the characters. The characters resist him, they are not easy to live with, they are impossible to define. You certainly can’t dictate to them. To a certain extent you play a never-ending game with them, cat and mouse, blind man’s buff, hide and seek. But finally you find that you have people of flesh and blood on your hands, people with will and an individual sensibility of their own, made out of component parts you are unable to change, manipulate or distort.”