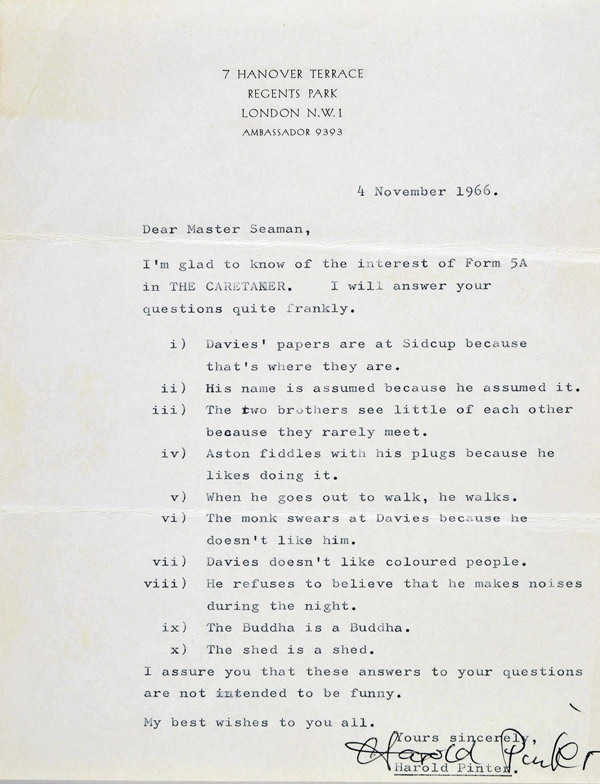 For decades many have searched for the hidden meanings in objects of daily use which Pinter liked to include in his works.

In 1966 a group of English students became so curious about this that they put pen to paper and wrote to Harold himself asking for clarifications regarding certain details in ”The Caretaker” .

Written in 1959 and first performed in 1960, the play is set in a dismal room full of assorted objects, with draughts and water dripping from the ceiling. Here we meet three singular characters: two young brothers, one of whom mentally disabled and haunted by the memories of his stay in a mental institution where he was submitted to electroshock treatment, and a tramp who attempts to make the small house in the west of London his home.

Having received the letter Harold answered all their questions. It was undoubtedly a sarcastic letter which was found only a decade ago when, at an auction, it slipped out of a first edition of “The Caretaker” which a lucky buyer purchased for 360 pounds.

At the students’ question on whether the objects mentioned in “The Caretaker” had a particular meaning Pinter replied “The Buddha is a Buddha. The shed is a shed”. And at the question as to why the main character, Davies, has an assumed name Pinter replied “His name is assumed because he assumed it”. Why do the two brothers see little of each other? “Because they rarely meet” was the obvious reply! And what metaphor lies behind Aston’s continuous fiddling with the plugs? There is no metaphor: “Aston fiddles with his plugs because he likes doing it .”

And after having satisfied all the students’ curiosities he sent his best wishes assuring them that the answers were in no way intended to be funny.